Sudbury, April 29, 2019 – Transition Metals Corp (XTM – TSX.V) (“Transition”, “the Company”) is pleased to announce it has received assay results from the previously disclosed drill program (see XTM press release dated February 12, 2019) conducted by North American Palladium Ltd. (NAP), on the Sunday Lake Platinum-Palladium Project located 25 km north of Thunder Bay, Ontario.  NAP holds an option to earn up to a 75% interest in the property from Impala Platinum Holdings Limited (Implats) and XTM holds a 25% free carried interest through to the completion of a Feasibility Study.

Results are sourced from a NAP news release dated April 29, 2019. Please refer to that release for the full information regarding the drill program.

Commenting on the results, Company CEO and President Scott McLean, P.Geo. stated “We’ve had tremendous exploration success at Sunday Lake since drilling the discovery hole in 2013. These recent drill results provided by Option Partner NAP, are the best reported to date, and comparable in overall grade to what is currently being mined by NAP at its nearby Lac Des Illes mine and mill complex.

Mr. McLean continued: “This successful drilling is an excellent example of the upside of the project generator business model employed by Transition. The Company discovered the PGM-Ni-Cu mineralization through a strategic alliance partnership with Implats. The Company now owns a 25% free carried interest in the current joint venture through to the completion of a Feasibility Study without any funding risk. We commend NAP for the breakthrough they have made in their exploration targeting strategies. We think that the same approach can be applied effectively to explore the Company’s 100% owned Saturday Night Project, located in a similar geological environment 16 km to the west.”

Quote from Jim Gallagher, President and CEO of North American Palladium “We continue to expand the PGM zone at Sunday Lake. This is currently our most advanced regional exploration project and represents our best bluesky opportunity and a key element in our long-term strategy of building an inventory of high-quality PGM assets in the Thunder Bay region.” (see NAP news release dated April 29, 2019).

The Company will host a webcast on Tuesday April 30th at 10am EST to discuss the results. Please register for the webcast by following this link https://attendee.gotowebinar.com/register/6961584657955478017

The Sunday Lake Project is held by Joint Venture Partners, Transition and Implats. NAP holds the right to acquire Implats’ 75% ownership in the Sunday Lake Project by completing work commitments totaling $4.5M and making cash payments of $3.5M over a five-year period. (see XTM’s Press Release dated June 21, 2017 for details). Without any further expenses, Transition retains a 25% free carried interest in the project through to the completion of a Feasibility Study.

For the period spanning February 2019 to April 2019, NAP has completed a total of 7,300m in six holes on the Sunday Lake Project. Results from the six holes are presented in Table 1.

Note: Reported interval length are estimated as being between 80% and 90% of true width of the intersected sulphide mineralization. 3E includes Pt, Pd and Au. 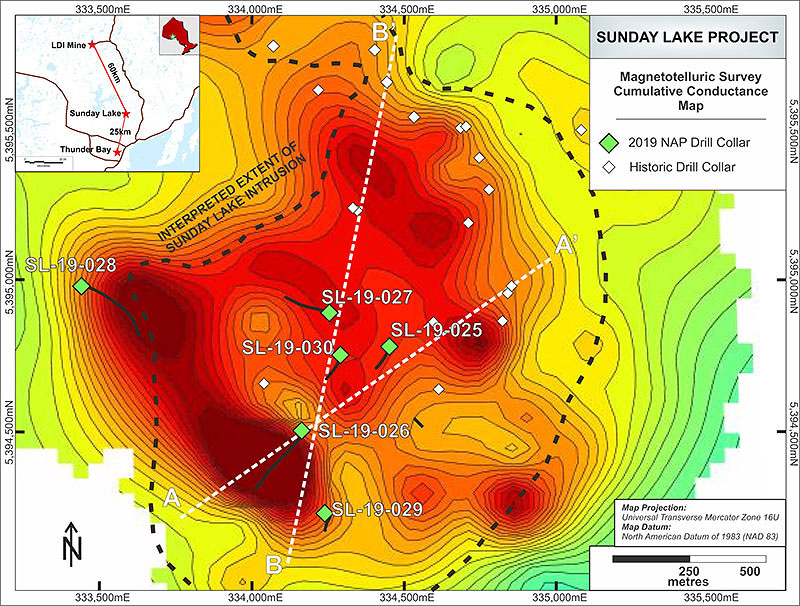 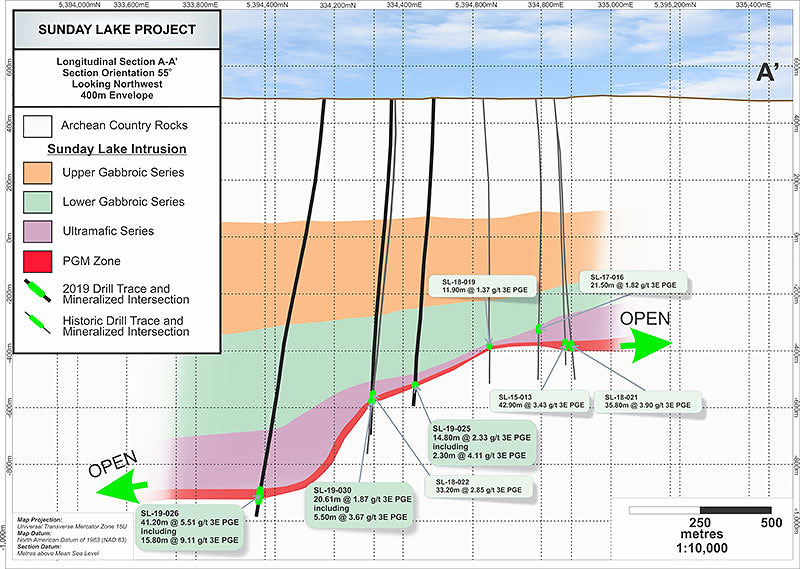 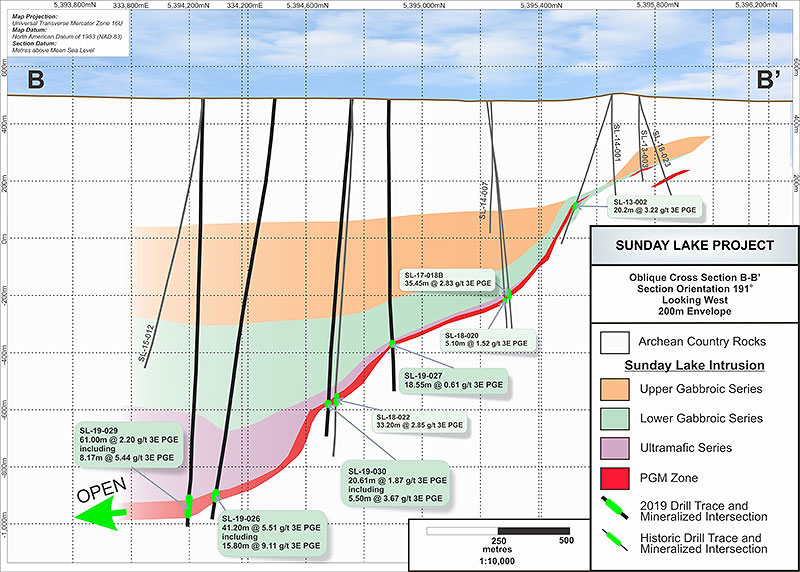 About the Sunday Lake Property

The Sunday Lake PGM Project is located 25 km north of Thunder Bay in Jacques Township and approximately 60 km south of NAP Lac Des Iles Mine-Mill Complex. The mine has been operational for more than 25 years with established infrastructure including an underground mine, surface pits, a 15,000 tpd mill and year-round access. Measured and Indicated Resources inclusive of Proven and Probable Reserves for the Lac Des Iles Mine were estimated at 72.98 Mt grading 2.51 g/t 3E (2.14 g/t Pd, 0.21 g/t Pt, 0.16 g/t Au) (North American Palladium Ltd., Technical Report, October 2018).

The Company’s 100% owned Saturday Night Project is located 16 km to the west of Sunday Lake and hosts mineralization and geology similar to Sunday Lake. Based on the results at Sunday Lake, the Company aggressively considering ways to advance this prospective project.

The technical elements of this press release have been approved by Mr. Grant Mourre, P.Geo. (APGO), a Qualified Person under National Instrument 43-101. The analyses reported in this news release were performed by ALS Global in Vancouver, British Columbia. NAP’s rigorous internal quality control and quality assurance protocols are described in detail in NAP’s current Technical Report for its Lac des Iles mine (October 2018 – available on SEDAR).

Transition Metals Corp (XTM -TSX.V) is a Canadian-based, multi-commodity project generator that specializes in converting new exploration ideas into Canadian discoveries. The award-winning team of geoscientists has extensive exploration experience in established, emerging and historic mining camps and actively develops and tests new ideas for discovering mineralization in places that others have not looked, which often allows the company to acquire properties inexpensively. The team is rigorous in its fieldwork and combines traditional techniques with newer ones to help unearth compelling prospects and drill targets. Transition uses the project generator business model to acquire and advance multiple exploration projects simultaneously, thereby maximizing shareholder exposure to discovery and capital gain. Joint venture partners earn an interest in the projects by funding a portion of higher-risk drilling and exploration, allowing Transition to conserve capital and minimize shareholder’s equity dilution. The Company has an expanding portfolio that currently includes more than 25 gold, copper, nickel and platinum projects primarily in Ontario, Nunavut, British Columbia, Nova Scotia, New Brunswick, Newfoundland and Saskatchewan.

Except for statements of historical fact contained herein, the information in this news release constitutes “forward-looking information” within the meaning of Canadian securities law. Such forward-looking information may be identified by words such as “plans”, “proposes”, “estimates”, “intends”, “expects”, “believes”, “may”, “will” and include without limitation, statements regarding estimated capital and operating costs, expected production timeline, benefits of updated development plans, foreign exchange assumptions and regulatory approvals. There can be no assurance that such statements will prove to be accurate; actual results and future events could differ materially from such statements. Factors that could cause actual results to differ materially include, among others, metal prices, competition, risks inherent in the mining industry, and regulatory risks. Most of these factors are outside the control of the Company. Investors are cautioned not to put undue reliance on forward-looking information. Except as otherwise required by applicable securities statutes or regulation, the Company expressly disclaims any intent or obligation to update publicly forward-looking information, whether as a result of new information, future events or otherwise.

Further information is available at www.transitionmetalscorp.com or by contacting: